From v5.x it's available the feature WORKPLANE .

This feature is useful for multiple purposes :

It may be used as LAYER system you may find in common CAD software.

You can group several 2D geometry in one WORKPLANE and hide or show them , depending on your needs.

Is possible define the WORKPLANE orientation freely in 3D space.

You can reuse that workplane to define a SETUP WCS or Tool Orientation for a one or more machining operations.

To be completely defined the WORKPLANE need an ORIENTATION and an ORIGIN POINT.

When the axis selection is enabled, you can click an edge, planar face a cylindrical face, or in general any entity that can define a vector direction.

The ORIGIN POINT can be defined by : 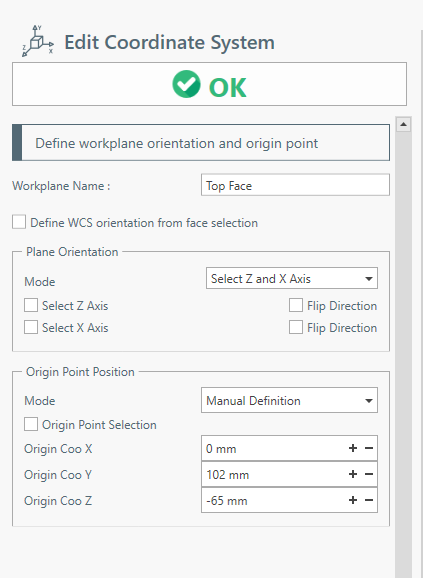 From main menu , it's available the workplace manager grid.

To activate a workplane, click on check box under the column "active".

Another useful option is the "Keep visible only active workplane". It will hide all the entities except the one related to the active plane.

When this option is OFF you can manually define the visibility of the workplanes .

The current active workplane is always visible , also if the visibility flag is set to HIDED.

If you hover the grid with mouse cursor, in the viewport will be shown the workplane axis system and related geometries. 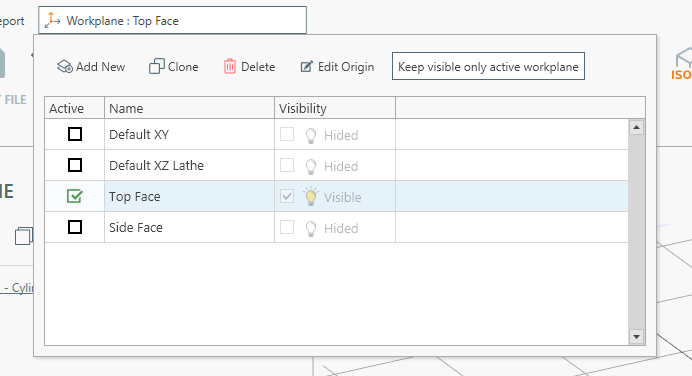